Discover How to Understand Dog Behavior Through Tail Wagging

A dog with a wagging tail is a dog that’s happy and content, so the story goes. Unfortunately, this story is a myth, and pet experts feel it’s important for dog guardians everywhere to realise that. Once you understand what your dog’s tail is telling you, you can better understand dog behavior. 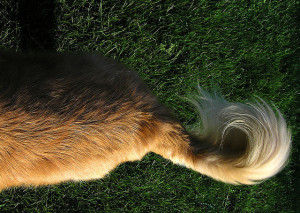 Recognizing what tail wagging really means is an important step to understanding dog behavior. This make it easier for you to determine the appropriate response in any given situation.

Why does a dog wag her tail?

Tail wagging is a way for dogs to communicate their emotions and signal intent. Experts know this because dogs only appear to wag their tales when in the presence of humans, other dogs, or anything else they perceive to be ‘alive’.

Of course, dogs can sometimes mistake movement for life, so don’t worry if you see your pet wagging her tail while staring at plastic bag blowing in the wind. A dog’s eyes are, after all, a lot more sensitive to movement than they are to color. This is why dog’s tails have evolved to become more visible to other dogs over time; all the better to make themselves “heard”. It’s also why docking tails is such a bad idea, as you take away a primary method of communication. At any rate, a dog that’s by herself, or at least thinks she’s by herself, will not wag her tail.

Basically, the tail wagging means the dog is excited or stimulated in some way, but that can be positive or negative. Mistaking a pup with a waggy tail who feels threatened or insecure for one who wants to be patted and played with can have terrible consequences. So it’s important for dog guardians to understand the various types of tail wagging and what they imply. 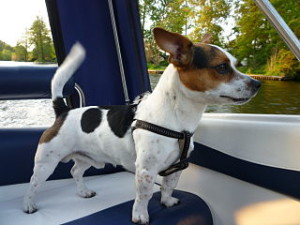 What the tail says about dog behavior

According to Stanley Coren, paying attention to two dog tail wagging characteristics will help you interpret your pet’s mood:

These pointers are useful, but don’t apply to every situation, especially as the ‘neutral’ tail position varies from breed to breed. Pet professionals see this as the equivalent to variations in accents across the United States.

For example, terriers and beagles have their tails upright even when in a relaxed state; in greyhounds, the low-hanging tail is considered the neutral position. Guardians have to interpret dog behavior based on how far the tail moves from its average position in that breed. 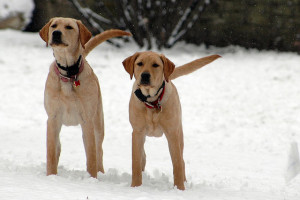 As reported by Megan Gannon from Livescience, the researchers fitted 43 dogs of various breeds with vests that monitored their heart rate, and observed their reactions to the tail wagging of their fellow hounds. The heart rate and anxiety levels were shown to increase in dogs that saw another dog wagging its tail to the left, while right-sided tail wagging elicited a more relaxed response. The researchers believe this has to do with how the right and left hemispheres of the canine brain govern emotion.

The subtleties of dog dialect

The key to understanding dog behavior is to interpret what a particular combination of tail movements signify. A tail moving from side to side usually means the dog is pleased, which is commonly associated with wagging. However, if it’s higher up, it might mean something different. This is why guardians need to pay attention to pet experts say about the canine mind and how they communicate with humans and other dogs.