Can Breeders Save Endangered Dogs?

Dog breeders get a lot of flak from animal welfare societies and animal rights activists. Mostly because backyard breeders and puppy mills are terrifying, cruel places that are more interested in profit than ensuring healthy living conditions. They also tend to inbreed dogs which destroys the gene pool and causes severe deformities, poor health and behavior problems. 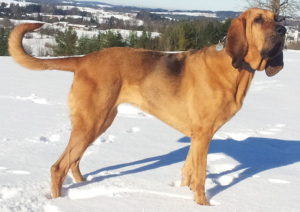 Because they breed prolifically, they contribute massively to the overpopulation problem. Furthermore, many of these carelessly bred dogs end up at shelters because owners don’t want to deal with the health and behavior problems. Depending on the shelter, they are either euthanized or spend the rest of their lives in a cage.

On the other hand, there are plenty of breeds that are so far from overpopulation they’re in danger of extinction. Responsible breeders could be the only way to save these endangered dogs.

Not all breeders are bad

Reputable dog breeders genuinely care about their chosen breeds; their dogs live in comfort, their breeding lines are tested for health problems, lines with problems are removed from breeding programs, they have litters once, maybe twice a year, they provide proper socialization for the puppies, they fully vet potential homes, they provide ongoing care and support, and they appreciate regular updates so that they can keep records of any health or behavioral issues that crop up.

Due to this vigilance and concern, breeders provide something very important to the dog world: A supply of healthy, strong genes.

And while some breeders do specialize in popular (or fashionable) breeds, some also bear the responsibility of ensuring the ongoing existence of endangered dogs.

Rosie Cima provides the example of turnspit dogs, who were used in 16th century British kitchens to keep spit roasts turning over the fire. Picture dogs running on a hamster wheel and you’ll have an idea of what they were required to do. When machinery was invented that could turn spits, turnspit dogs were no longer required. In fact, owning a turnspit dog was a sign of poverty as the household couldn’t afford modern machinery. With no job to do, and no other redeeming features (according to fashions at the time), turnspit dogs slipped into extinction.

As cold as it sounds, some dog breeds aren’t fashionable enough to justify their continued existence. We turn again to Rosie Cima, who provides bulldogs as an example of a breed that was lucky enough to survive losing its job – in a manner of speaking. Bulldogs were bred for bull-baiting, a vicious sport that was outlawed in the 19th century. These bulldogs were considerably different to modern breeds, for example, they were taller, leaner and their noses were not as flat.

At the time when they lost their jobs, Queen Victoria had established dog fancy as a favourite pastime in the UK. She favoured small breeds, so breeders focused on designing small dogs with interesting features that would make their owners a talking point in society. Gradually, short, squat, snorting bulldogs emerged and the UK loved them. It wasn’t long before the hobby hopped across the pond and dog fanciers in the USA started toying with their own breeds.

Unfortunately, this kind of breeding has resulted in terrible side-effects. For example, bulldogs can’t breed naturally anymore and they have breathing problems, especially in hot weather.

Where do breeders come in?

They can maintain the health of lines by carefully crossbreeding similar dogs that will ultimately enhance a particular breed. The gene pool widens, the risk of genetic problems decreases and the result could be a more attractive and robust dog. In this way, not only will the genetic component of breeding be uncompromized, but rare or endangered dog breeds can also be saved.

Perhaps one of the most important things that breeders can do is breed for behavior rather than form. Behavior problems are the biggest reason dogs are destroyed or surrendered to shelters. Some behavior problems have genetic roots, some are related to the health and emotional state of the mother during pregnancy and birth, and some are related to health, care and socialization during the first 2 months of a puppy’s life.

By using desirable behavioral traits to identify breeding pairs, breeders can give dogs a genetic shot at emotional stability, which increases their chances of remaining with their new families for life. By providing safe, comfortable and stress-free environments for their dogs, and adequate socialization for puppies, breeders can bolster the sociable genetic component and dramatically improve the lives of their dogs and the families who buy them.

Is it important for breeders to save endangered dogs?

Now that is a controversial question.

There are some people who contend that it’s not the end of the world if dog breeds become extinct. They’re not wild animals that play a valuable part in any ecosystem – not really. They exist because people want them to exist; companionship is their primary purpose. If there is no demand for a breed’s particular kind of companionship, should time and resources be spent saving them?

Yes, say specific breed fanciers. The reasons for saving vulnerable dog breeds are all subjective, but that doesn’t make them less valid for the people concerned.

The Kennel Club in Britain, in conjunction with the Irish Kennel Club has identified some of the most at risk dog breeds in the UK and Ireland. There are no comprehensive programs to revive the breeds on the endangered dogs list, but interest in some breeds has been rekindled as a result of the publication of the information.

There is a similar list of endangered dog breeds in the USA (based on information from the American Kennel Club) and interested parties have identified some of the most vulnerable breeds in the world. Let’s take a look.

So, back to the question we asked at the beginning: Can breeders save endangered dog breeds?

They might be able to, given enough public interest and the time to develop a healthy gene pool.

Perhaps the real question is: Should breeders save them?