Hip dysplasia is a fairly common health problem that affects many dog breeds – especially large breeds. It can be caused by a number of different factors but most dogs who suffer from hip dysplasia are genetically predisposed to the disease. There is early onset hip dysplasia – which may show up in your puppy after four months – and late onset, usually as a result of osteoarthritis. Hip scoring tell you how badly your dog’s hips are affected. 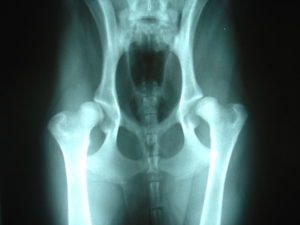 In a nutshell, the hip joints don’t develop properly and that affects the surrounding muscle, ligaments and connective tissue. Particularly bad cases can result in loss of joint function. There are, however, many different treatment options, including surgery, hydrotherapy and acupuncture.

What is hip scoring?

Hip scoring is a test that determines the degree of deterioration in the hip joint. It’s a standard scoring system measures the severity of the disease in each hip. In the UK, the BVA/KC scoring scheme is used to score hip dysplasia in dogs. It’s a test that was designed by the British Veterinary Association (BVA) and Kennel Club (KC). It consists of a series of x-rays which show nine aspects of each hip. The x-rays are taken by your local vet but sent to the BVA for expert evaluation. The results are sent back to your vet.

Each aspect is awarded points, which are then added together for a total score per joint; the higher the score the greater the deterioration. Per hip, zero is the best score possible and 53 the worst.

An average hip score as been calculated for dog breeds which are prone to hip dysplasia. The idea is to help breeders so that they don’t breed dogs with a genetic predisposition to hip dysplasia by only mating dogs with scores well below the average.

Dogs have to be at least one year old to be scored and they are only scored once under the BVA/KC scheme. According to the Kennel Club, the cost of scoring one dog is £57 (incl. VAT), but that drops to £50 (incl. VAT) if five or more dogs (belonging to the same owner) are tested at the same time.