How to Introduce New Pets to the Household (Part 1)

Think about what it would be like to be taken from your home and deposited in a strange place surrounded by strangers, some of whom may not be entirely nice. It’s pretty intimidating and overwhelming, isn’t it? That’s how your new pet feels when you bring them home and put them face-to-face with resident pets. This is why it’s important to introduce new pets slowly and carefully. 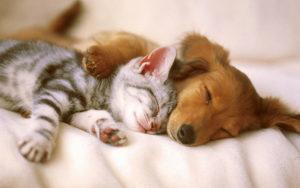 Your resident dog or cat isn’t too pleased with the intrusion either. The best way to ensure a peaceful household is to introduce new pets to each other properly.

The bad news is that it’s not a quick process. It takes a while to build up confidence and trust between animals. If you hurry them, you could end up with a great deal of anxiety, fear and possibly defensive aggression – which usually ends in tears, or worse. The good news is that if you manage pet introductions well, the chances are good you’ll keep everyone – pets and people – happy.

Honestly, the best thing to do is confine the newcomer to a room you’ve specially kitted out. This is  non-threatening way to give your new cat a chance to settle and to adjust to other animals in the vicinity. It also lets your resident pets adjust to the idea of new addition to the family. Once or twice a day you can confine your other animals and let the newbie out to investigate the surroundings.

Get your pets used to the idea of communal living by feeding them on opposite sides of the closed door. Nothing generates goodwill so much as a shared dinner. In the beginning it’s important that the door remain closed and that the distance is sufficient for everyone to be comfortable. You don’t want anyone too nervous to eat.

You can gradually move the food bowls closer until they are right outside the door. Then you can open the door a crack. This is just enough for them to see each other, but not enough to put them off their food. Once again, you can gradually increase the opening until they’re happily eating with the door wide open. You can also baby gate as an interim measure so that your pets can eat in full view of each other but with some protection still in place.

Start getting everyone used to each other’s scent during the confinement. Rub a towel or old t-shirt on each animal and place it where it will be investigated by the other animal.

When they’ve reached the point that they can eat with the door wide open, you can start allowing short interactions. Five to ten minute interactions are sufficient. Keep interactions positive and monitor them closely for everyone’s safety. Some posturing is normal, so don’t panic if there is a little hissing or a bark or two. Separate the animals if there is a little spat, and let them meet again when they’re calm. If one animal is very anxious or unhappy, or the spat is more serious, separate everyone and go back a few steps in the process. 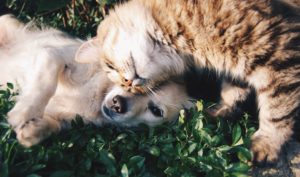 Use treats to reinforce positive behavior; for example, sniffing each other peacefully, gentle play, lying side-by-side or just generally being calm in each other’s presence.

If you’re introducing a new cat to a dog, it’s best to keep your dog on lead for the first few meetings. This allows you to control the level of interaction and keep your new cat safe.

Reward (threat) your dog for sitting or lying down calmly before someone comes in with the cat. They should stay on opposite sides of the room for the first few sessions and kitty must also be occupied with treats or catnip. When they’re comfortable, kitty can “visit” the dog, who is still treated for calm behavior. If either animal looks uncomfortable, separate and go back a few steps. If they’re both ok, you can move to controlled meetings off-lead. Even when it all goes well, always supervise and/or manage all interactions when kitty has the run of the house.

Never punish either your dog or cat for reacting in a fearful or aggressive manner during the introductions. You will create negative associations with the new animal, as well as increase your pet’s anxiety. In short, you’ll only make the situation worse.

Special care is needed if you’re introducing a kitten to an adult dog or a puppy to an adult cat. For kittens and dogs, it’s best to keep poochie on lead for all interactions until kitty is big enough to escape or take care of herself. For puppies and cats, it’s best to separate them while you train pup to keep calm around kitty. He must learn that quiet behavior is good and chase is not an option.

Find out about how to manage dog-to-dog introductions in part 2.