Simple Guide on How to Teach Your Dog to Love Play

Play is an important part of your dog’s life, but sometimes playing with Fluffy is easier said than done. Some dogs are reluctant to play. They may simply not like it, or they might never have learnt how. Shelter dogs (especially puppies) who don’t get much contact with people, often don’t learn how to play. In fact, human play behavior and people-operated toys are a scary mystery. Don’t stress, because it’s never too late to teach your dog to play. 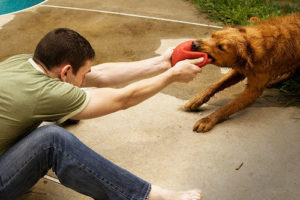 Julie Hecht recently wrote an interesting article on why it could be your fault if your dog is reluctant to play with you. The main reason is that you just don’t do it right. Dogs have a very sophisticated play ‘language’ built on behavioral rules that allow them to play together in mutual enjoyment. It’s a subtle language with many signs and signals that other dogs are attuned to, but which we miss. In our well-meaning but clumsy attempts to get our dogs to play with us, we usually transgress all the rules and can come across as rude, pushy and freaky.

Encouraging play: What to do and what not to do

Hecht cites a study by Rooney, Bradshaw and Robinson (2001) (also cited by Patricia McConnell) that looked at how dogs respond to people’s play signals; specifically, the play signals they use without toys.

Think about what you do to entice your dog to play. It’s highly likely that you clap your hands, pat the floor or bend with your hands on your thighs. These are among the 35 common play signals that people use. Other signals identified include pushing dogs, barking at them and even blowing at them. These signals are only partly successful. The interesting thing is that no matter how unsuccessful the signal, we persist in using it.

Some of the most popular signals are the least successful. For example, patting the floor is the most common signal, but it only results in play 38% of the time. Clapping is also not very successful, yet it dies harder than Bruce Willis. If you really want your dog not to play with you then you can kiss her or stamp your feet. These resulted in play 0% of the time.

Successful signals are chase-and-run and lunging forward and back (start/stop play). They have a 100% success rate. Tapping your chest to encourage jumping is also successful, and so is the human version of the play bow, which includes bending down with hands on thighs and getting down on all fours and dipping our chests.

Other factors at … play

Our behavior is not the only factor at play in play. Dogs with unpleasant histories or who are inherently anxious or nervous are limited by their comfort levels. It’s up to us to moderate our behavior and only play as much as the dog is comfortable with.

Teach your dog how to play

If a dog is very nervous then abandon the thought of play altogether and rather work on establishing a safe bond. Start with tossing treats to the dog, so she isn’t pressured to come and go into your space to get them. When she’s ready, she’ll come to you for more. Don’t rush the handling, simply put your hands out and let her investigate them and brush up against them as she likes.

When she is happy to be in your space, you can start with some light handling. As she gets more comfortable, you’ll find that she initiates more interaction until she tells you that she’s ready to play, usually with a play bow.

Respond with a play bow of your own, possibly the less vigorous one with just your hands on your thighs. Keep your movements small and slow to start off and don’t reach out for her just yet. Once again, she will dictate the pace, so when she’s ready for more tactile play you can start with some gentle bodily contact.

Teah your dog to play with toys

According to the Association of Professional Dog Trainers, you should start with anything that you can throw but which doesn’t roll. The reason being you aren’t going to let your dog play with the toy unless you are playing together. It needs to be stored safely high up (but in sight) without any risk of it rolling into reach. The reason you don’t want your dog playing with it on her own is because it needs to have special meaning for your dog. It can’t be any old thing that lies around and becomes boring. Rope toys, tug toys and stuffed animals are good starting points.

Your next step is to ‘tease’ your dog before you get it. Put on your best dog voice and say things like, “Where is it?”, “Do you want it?”, “Do you really, really want it?” until your dog is quite excited. Then get the toy and continue with your doggy voice, saying things like, “What’s mom got?”, “Do you want what mom’s got?” All while swinging the toy, throwing it in the air and jiggling it in front of your dog but keeping it out of reach.  Be as excited and silly as possible, no one is watching except your dog and she’s not judging you. In fact, she should want in on the action.

Initially, when you teach your dog to play you should keep the session short, not even five minutes. It’s important that your dog doesn’t lose interest. Repeat the routine several times during the day. Always put the toy away between sessions. After a day or two you can start letting your dog get the toy. Start off by allowing just a second’s worth of contact. Use lots of praise and silly excitement for the contact and then take it away to start the game again. Gradually you’ll build it up until your dog is happy to hold the toy in her mouth while you play tug.

Keep play sessions short even when she has the hang of playing with toys. You don’t want to bore or overtire her.