How to Choose an Affectionate Cat & Get Love and Attention

There is a perception, especially among anti-cat people, that felines are unfriendly, unsociable, and highly independent. The independent part is right, but many cat owners argue that their cats are as affectionate and sociable as dogs. While cats are individuals with different characters and levels of attachment, there are certainly affectionate cat breeds out there. 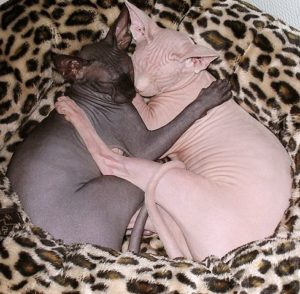 We look at five of the most affectionate cat breeds.

And remember, don’t judge by appearances.

There is a general consensus that cats don’t come more affectionate than the Sphynx. So don’t discount this odd looking feline when you’re on the hunt for a friendly companion. One doesn’t think of the hairless Sphynx as cuddly but cuddling is one of the things they love best. They love spending time with people, can be quite chatty and love to play and entertain with silly antics. What’s more, they don’t just like people but also get on well with other animals.

The Maine Coon is as affectionate as it looks. They are not small cats, so be prepared to have a large lump on your lap and in your bed. They are called “gentle giants” because they get on with everyone, from dogs to kids. They’re friendly and affectionate and even dog-like in that they can be leash trained and will happily play fetch. Maine Coons demonstrate their affection through gentle head butts. They love company, so expect them to follow you into the bathroom.

Persians are perennially popular thanks to their looks and their affectionate nature. They’re not as boisterous, playful and silly as some of the other breeds on the list, but they thrive on attention and love sitting on laps, especially if a grooming session is in the offing. If you need a calm, quiet companion who will relieve your stress simply by sitting by your side, then a Persian is for you.

Ragdolls are so named for a reason. They flop in your arms or on your lap and revel in the attention they naturally receive. They stick like glue to the people in their lives and love to play. They’re good at learning tricks and love showing off their skills. They’re also very laid back, so they’re perfect if you’re looking for a chilled companion who doesn’t let much faze him.

Siamese are probably the most vocal of cat breeds. They can chat for hours at a time and think nothing of demanding your attention whenever it suits them, which is almost all the time. Siamese cats don’t do well on their own, so they’re not for people with very active social lives and who spend little time at home. They like to join in with whatever you’re doing, so expect company while gardening, cooking, and cleaning and doing yoga. You can train Siamese cats to walk on a leash and do other doggy things like play fetch. While some cats prefer being solitary, it’s often recommended that you have two Siamese so that they can keep each other company while you’re away. That way they don’t develop any behavioral or emotional problems.