TV for Dogs: Company for Canines or Senseless Service?

Those of us who have canine companions tend to adore them and will do almost anything for them. Well, American TV company CEO Gilad Neumann has taken that devotion a step further. He has created a cable channel specially for pets with a waggy tail. Yes, TV for dogs is a real thing, and it’s actually not a bad idea. 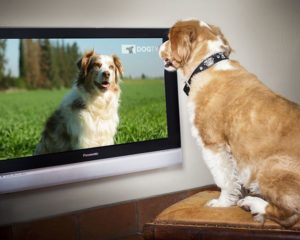 DogTV is a cable service that allows owners to switch on TV for dogs while they’re out of the house at work or socializing. The TV can be company, relieve anxiety, and even provide a measure of socialization.

The canine cable service that  creates TV for dogs

The cable service, which costs $4.99 a month, has been billed as an anxiety cure for housebound canines. The production team consisted of tree animal experts and program research is based on more than 40 studies of animal behavior.

When it comes to color for instance, the channel compensates for the fact dogs can’t see red and green by accentuating the vividness of grass. After all, TV for dogs should really offer more than mere black and white.

The overall content on DogTV is specifically designed to ‘improve’ a dog’s tolerance for certain environmental stimuli.

Neumann explains: “We expose dogs to more challenging situations like doorbells, vacuum cleaners, riding in cars, children—things that they tend to be more stressful around.

“With the right volume of content we help them, basically, deal with it better.”

The content is also shot from a dog’s point of view. That is from long and low angles. HD TV and high-definition cameras mean that dogs now see TV images more clearly. In analogue days all dogs really saw was a flickering screen. Programs consists of nature scenes or shots of other dogs sleeping, in a bid to relax the dog at home. 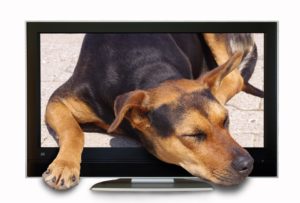 Then there are the images of dogs surfing, running around and playing. The latter is intended to encourage the dog watching the TV to start running round himself and getting involved in some activity (rather than being a day-long couch potato).

High frequency sounds have been removed from all programs since these can annoy dogs and heavy metal music has also been banned.

Cable channel is company for canines

According to director Nick Dodman of the Animal Behavior Clinic at Tufts University in Massachusetts, dogs can recognize other dogs on TV and their own breed in particular so the channel may indeed provide entertainment and company for dogs while their owners are out the house. But is there a paws button?

Actually, we’re all for DogTV. We just don’t fancy fighting over who gets the remote.