What Interesting Feature do Baby-Talk & Puppy-Talk Have in Common?

Up until recently, the act of puppies pricking up their ears to human voices was simply cute. Now we know that it’s actually a form of communication between humans and their new pups. It’s not the sort of language that can be learned, however. Puppy-talk comes naturally to humans and puppies (but not adult dogs). 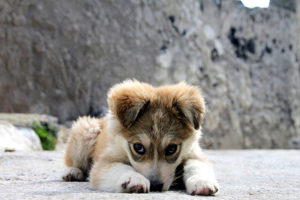 Interestingly, the language is also the same we use to communicate with human infants. Researchers from the University of Lyon at Saint-Etienne conducted an in-depth study on how people use ‘puppy-talk’ (or ‘baby-talk’) to engage with listeners who can’t speak.

Baby-talk & puppy-talk: The same, but different

We keep doing it because puppies and babies always respond to it. Mind you, we keep doing it with adult dogs too, even though they are relatively unmoved by the tone. The researchers also found that puppies showed the same level of response to puppy-talk and speech directed at adult dogs. However, they respond more to puppy-talk than human-directed speech.

(Interesting fact: When we talk to babies and puppies we increase our pitch by 21%)

There are two possible reasons for the difference in response:

Babies are babies no matter the species 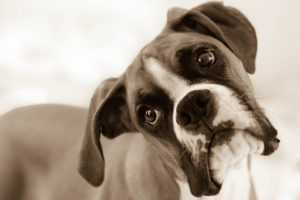 Why do we increase our pitch and sing-song to our dogs as if they were human infants? According to Evan Maclean of the University of Arizona’s evolutionary anthropology department, dogs give a lot of signals that trigger nurturing behavior. Think of the pathetic whine when puppies are left alone, or the cute head tilt. Just thinking about it probably made you go “Awww” inside.

Not everyone agrees with the findings. Duke University’s Catherine Laing (researcher in neuroscience) says the similarities have little to do with communication per se. Laing maintains that the types of words used when talking to dogs and babies, and the manner in which they are spoken are vastly different. According to Laing, infant-directed speech enhances language learning in children. This obviously isn’t the goal of puppy-talk.

Puppies might not be learning our spoken language, but they are learning to read our body language. And they learn that certain of their actions naturally result in more attention from their humans. So they do it more often. If the head tilt always makes good things happen, pup will offer it more often and may even offer it into adulthood.

While dogs may not understand words, they certainly understand tone. Researchers from Eötvös Loránd University in Budapest scanned dogs’ brains while they listened to their handler’s voice. They found that dog experience reward when the words and the intonation match. That is, both indicate praise. So, saying, “Good puppy, so clever”, in a high tone will give dogs a feeling if reward. But saying, “However the weather”, in a high tone doesn’t generate that rewarding feeling; neither does saying, “Good puppy, so clever”, in a neutral tone.

It’s not so much that dogs understand the words, as they are familiar with praise words that are associated with a certain tone. Change either and the association is lost.

One of the interesting findings to come from the Hungarian study is that dogs process speech similarly to humans. So they process meaningful words in the brain’s left hemisphere and tone in the right hemisphere.

The findings may not sound like such a big deal to some people, but to those interested in animal behavior and learning, every step that helps explain how dogs tick is a step in the right direction.