Dogs & Sticks: Discover Why It’s Not a Match Made in Heaven

What is the quintessential image of a happy relationship with your dog? Throwing a stick in a field, right? There’s the joy of your dog bounding to collect the stick, the joy of racing back to you with a goofy grin on her face and the joy of spending time in delicious sunshine with your best friend. 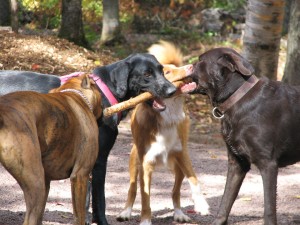 Unfortunately, there’s a chance that all this joy could end in tears. Veterinarians warn people time and again that sticks are incredibly dangerous for dogs.

Back in 2008, Professor Dan Brockman and Zoe Halfacree, from the Royal Veterinary College, University of London, co-authored a report on the serious injuries that result when dogs are stabbed by sticks. Injuries include paralysis, internal damage, blood loss, and death from infection. In fact, infection is one of the most dangerous effects of stick injuries because it can go unnoticed until dogs present with severe symptoms, which makes treatment difficult.

Sticks are covered in bacteria, fungi and yeasts and when they’re in the mouth, they pick up even more. This makes oral wounds a prize environment for germs and other nasties to breed. Super bacteria which are resistant to most antibiotics result. Obviously, the chances of recovery are lessened.

But I didn’t see a wound

Infection doesn’t need to be caused by major injuries; a small splinter in the palate is enough to be lethal if not treated quickly. And how many of us can say that we routinely inspect our dog’s mouths for splinters? Even if you spot a stick injury and it’s treated, splinters, which damage soft tissue, don’t show up on standard x-rays.

Dogs are also masters at disguising their pain. Guardians shouldn’t blame themselves if they don’t notice a festering wound in the throat, abdomen or gums until the symptoms are obvious. This is usually when dogs lose weight, are lethargic and don’t want to go on walks or eat.

In June 2013, then president elect of the British Veterinary Association, Robin Hargreaves, recommended vets use modern scanners instead of x-rays to detect small splinters in stick injuries. These scanners are better at picking up small traces of wood in the body. The chances of missing a splinter are reduced and the risk of infection minimized. Removing all splinters during the initial surgery reduces the chance of second or even third surgeries. This saves dogs from invasive procedures, saves you from worrying about your dog surviving multiple anaesthetics, and saves you money.

CT scanners may not be cheap to use (around £1,000) but the costs of returning to your vet again and again to repair damage and treat infection can total £5,000. And many dogs don’t make it. So scans are definitely the safer and more affordable option. Many pet insurance policies (even accident-only policies) will cover scans anyway, so there is no reason your dog has to undergo more invasive procedures than necessary.

What are the most likely injuries?

Jason Nicholas lists some common injuries that result from stick-stabbings. 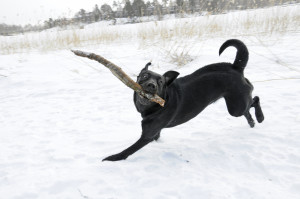 Sticks are bad for dogs in general

Your dog doesn’t need to be impaled or stabbed by a stick for injuries to occur. Simply chewing bits of wood can cause a great deal of damage. Again, this is unfortunate because many dogs like nothing more than to help themselves to a twig from under a tree and chew it. Once again we turn to Jason Nicholas, who also lists the dangers of stick-chewing. 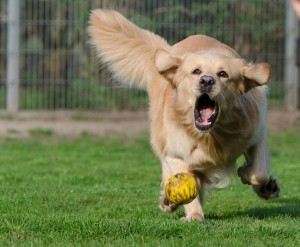 A lot of people poo-poo the idea that sticks are dangerous. “I’ve thrown sticks for all my dogs over the past 40 years and never had any injuries. These are just scare-tactics,” is what they say.

Fair enough, the majority of dogs won’t be injured by sticks in their lives, but do you really want to take the risk? Many vets report that they treat 2 – 3 stick-stabbing injuries per month. Now think of the number of vets in your town alone. Now think about the number of vets in your country … in the world. Suddenly, the odds of your dog getting a stick stuck in her throat don’t seem that unlikely, do they?

It’s much better to be safe than sorry. Rake up the twigs and sticks in your garden regularly, swap sticks that your dog picks up on walks for a tasty treat and get your dog hooked on rubber sticks, balls, Frisbees and rope toys.