Discover All You Need to Know About Burmese Cats

There are two types of Burmese cats, American Burmese and European Burmese. They are largely similar in character, differing primarily with regard to appearance. European Burmese have more rounded heads, less compact bodies, and more coat colors than their American counterparts. 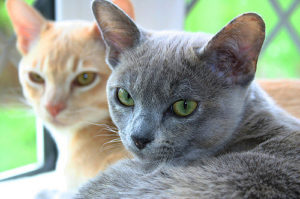 Colors include red, cream, brown, blue, lilac and brown, chocolate, blue and lilac tortoiseshell. They are extremely friendly and affectionate cats and require a great deal of human companionship. It doesn’t take long to establish themselves as the center of the household.

While getting a kitten from a reputable Burmese breeder has its attractions, you can save a life by contacting a cat shelter or rescue organisation to find out if they have any young or adult Burmese cats available.

Temperament: Burmese are affectionate, intelligent and very good with kids and other animals – especially other Burmese. They live for their companions, so don’t get a Burmese if you’re away from home much of the day. They’re energetic and playful and carry their playfulness into adulthood. One of their strongest personality traits is their curiosity, so expect your Burmese to investigate everything and accompany you everywhere just in case you do something interesting. 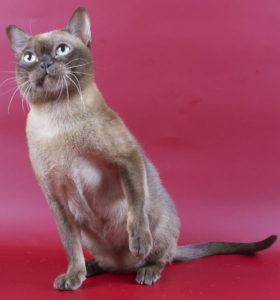 Exercise: Burmese cats are highly trainable – with positive reinforcement, reward-based training – so you can train your cat to walk on a lead and harness. That’s one way to ensure your Burmese gets enough exercise; another way is through interactive play. They can be trained to play fetch and perform a range of tricks, which gets their brains in good shape. Ensure you have a variety of toys to keep your Burmese entertained, and don’t underestimate the entertainment value of a piece of string with a feather attached or a cardboard box castle.

General care: With short hair, Burmese cats don’t need major grooming. A weekly session with a brush or comb will do nicely. You should also learn how to brush your cat’s teeth as gingivitis is a common problem among Burmese.

Health concerns: Some Burmese go their entire lives without so much as a sniffle. Others are plagued by health problems, some of which include eye problems, enzyme deficiency, orofacial pain syndrome, poor balance, potassium deficiency), and heart conditions. Many are also sensitive to anesthesia. Given the range of potential health problems, it’s a good idea to get pet cat insurance as soon as possible after you get your cat.

Burmese make great family cats because they can get on well with every member of the family, from young kids to grumpy granddad and Fido. They have no concept of personal space, however, so expect to share your lap, your bed, your keyboard and even bath time with your Burmese. If you think you can ignore a Burmese cat and it will go away, think again. They can give those who ignore them a good talking to and aren’t above pawing for attention.