Do Artificial Pheromone Products Truly Work for Your Pets?

The evaluation of the effectiveness of pheromone treatments in pets is an interesting field. Artificial pheromones are widely used in the breeding industry to induce heat in female dogs. There is significant scientific evidence that they are effective in this arena. There is also a growing market in the use of synthetic pheromones to calm pets down. 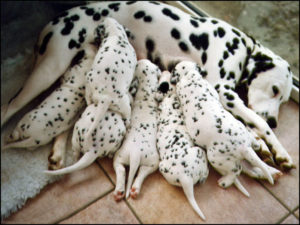 Products are used to reduce anxiety when the family moves home, for example. Pheromones also reduce trauma during events like thunderstorms and long car journeys. And they can help prepare animals for surgery.

What is a pheromone?

A pheromone is a chemical substance released by an animal which is intended to change the behavior of other animals.

Therefore, in theory, it’s possible to artificially produce copies of pheromones that we know have certain effects, in order to elicit those effects in our pets.

However, there are a number of questions to ask:

You’d think this would be easy to determine. We take an upset dog, we spray it with a pheromone, and if the dog calms down we have a dog-calming pheromone. But it’s not that simple. The first complication is that, unlike in cases of a dog going into heat, it’s fairly hard to determine with any accuracy whether a dog or cat has been calmed without doing things like sticking electrodes in their brains. Such measures are unpopular with scientists, expensive and illegal in several countries (thank goodness!). So, animals may appear calm without actually being calm. We could measure their heart rate, but even that doesn’t provide enough insight into whether or not they’ve actually calmed down.

For these reasons, the scientific literature on which pheromones do what is not as strong as we’d like it to be. There’s still more anecdote than experiment and frankly, it’s still a murky area.

For example, some brands of DAP (dog appeasing hormone) appear to reduce stress under certain conditions but not others, and certain breeds appear to feel the effects more than others. Read Wikipedia’s page on DAP for more information. 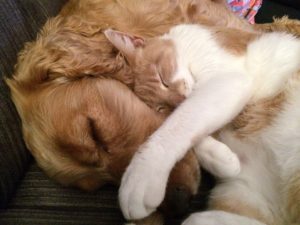 So let’s assume we’ve found an effective pheromone for the behavior we want to elicit. Now we have to see whether the synthetic copy has the same effects as the natural original. Animal medical experimentation has limits that human medical testing doesn’t, such as not being able to ask the animal how they feel. In order for the synthetic pheromone to work, you’d have to know that the lab work was correctly carried out and that the manufacturers subsequently did a good job.

This is very hard to do as a layman, but basically the best you can do is to try and find a vet-recommended brand.

The last variable is the delivery. Ideally, the pheromone is delivered in a breathable form, since pheromones are detected in the vomeronasal organ. The vomeronasal organ is an olfactory sense organ that is found near the nasal bones. You also want to avoid the pheromone mixing with any ‘carrier substance’ which could render it ineffective. Again, a trusted manufacturer is the way to go here.

But the scientific jury is still out with regards to their efficacy.

Oh hell no, I’m not a scientist. I just want to know if this works!

The best answer we can give you at this point is ‘sometimes’. Some breeds respond better and faster than others. It seems young animals are affected faster than senior citizens. At least we can say with relative certainty that there’s no proof they do any harm. So it might be worthwhile to see whether these work on your pets. 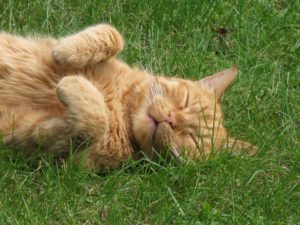 We’ve said it before and we’ll say it again…

Talk to your veterinarian. Vets have the scientific training to evaluate evidence, and the professional obligation to stay current on new developments and research. They also have experience and feedback from other clients, which is something you’re not going to find in a scientific review. And they can let you know which are the brands to avoid and the ones to buy.

You should also understand that, even if pheromones do have an effect, they’re unlikely to be sufficient in isolation. If you’re looking at calming a jumpy pet, you should also check out our article on building confidence in timid dogs.